Why to Avoid DEET Mosquito Spray?

DEET is a chemical which has been used nearly all insect repellents including mosquito spray. The DEET was first developed during the World War 2 to use in the war but later on it was registered as a pesticide chemical and made available for the consumer. Today, when DEET becomes the common ingredient of mosquito spray, it now becomes a question that whether one should use it to keep the mosquitoes away or not.

The DEET has been found in all mosquito spray. In past couple of years, the environmental organizations are writing and educating people about the negative effects of the DEET. It is true that mosquito repellents which contain DEET are very useful and protect your surrounding from the mosquitoes but in return, you are getting a lot of other infections and some diseases which can go very bad if not treated in appropriate time.

As per research 10 to 30 percent of any mosquito repellent is represented by the DEET. Not only this, there are even some products which can be applied directly to the skin can contain 100% of the DEET.

While manufacturing of mosquito repellent whose product contains DEET says that there are no side effects of DEET, I have found some of them and I am sharing with you which will help you to understand that why should we avoid using DEET containing mosquito spray. 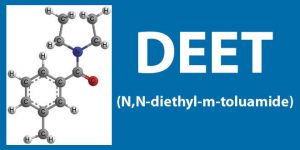 As per Cornell University, the usage of DEET directly on the skin can cause many painful issues and one of them is blisters. These blisters could last longer and leave scars forever. The other skin related problems which can be caused by rashes, irritation of the skin, burning sensation and even mucous membranes etc.

Several studies have shown that the use of DEET can cause permanent damage to DNA. According to the Institute of Development Research in France which has been published in 2008, the use of DEET has been reported to leave a negative impact on the nervous system. This also leads to eye-watering, excessive salivation and muscle spasms which later may lead to ultimate death.

Common side effects of DEET:

Redness, rash, irritation, and swelling are some common side effects of using DEET. The other side effects which have been reported by the people who have used DEET for a specific time are eye irritation and watery eyes. These side effects usually happened if the DEET has been sprayed directly on the skin and area near to the eyes.

The mosquito repellent which is available on Safe-O-Kids is not only DEET free but they are free from other chemicals like alcohol etc.

Safe-O-Kid has a wide range of mosquito repellent products that are safe, natural and less-timing consuming. It could be the safest way o protect little ones from mosquito bites both inside the house and outside. The products are designed especially for kids and are tested by international experts for lasting effectiveness and zero side effects.