Safe-O-Mos has a wide range of mosquito repellent bands and are the safest way to protect little ones from mosquito bites both inside the house and outside. Being a brand totally dedicated to children’s safety, Safe-O-Mos does NOT use any ingredients harmful for kids (No Eucalyptus extracts and DEET Free / No Picardin/Alcohol like chemicals) as such ingredients might interfere with child’s nervous and respiratory systems and cause discomfort or severe side effects like seizures.

What is DEET and how it is harmful? With many mosquito repellent products available on the market, every parent should know about the ingredients used, especially DEET. DEET is a mosquito repellent chemical which was first registered in 1957 for use. It is a synthetic chemical which is derived from coal tar and is known for its high capability of repelling insects. DEET is the short form of its chemical name, N, N-diethyl-meta-toluamide which has a characteristic faint odor and is nearly colorless in its liquid form. The product was first invented for use for US army in 1946 after which it became public in 1947 to be used by adults as well as children. It was used for personal use and applied directly on the skin for repelling insects. 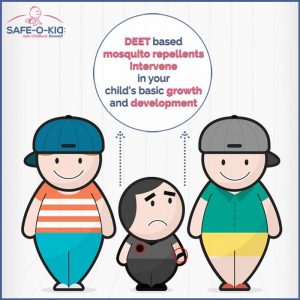 DEET is widely used in mosquito repellents, and it is seen that more than 30% Americans slather it on their skin. This chemical is used for resisting biting insects such as ticks, fleas, mosquitoes, flies, etc. It is being used for about past 40 years by millions of years to reduce the risk of mosquito bites and fleas. Moreover, the products made of DEET are available in many forms such as lotions, aerosol, pump sprays, gels and creams.

Mosquitoes and other blood-sucking bites are attracted towards the host from their body odor or by sensing carbon-dioxide that we breathe out. When a person applies DEET insect repellant over their skin and the insect approaches, it confuses the sensors of the insect and repels them. These formulations work over a short distance, and hence you may find several insects buzzing near you. Until and unless they bite you there is no need to apply more of the repellent formulation.

But Is DEET Safe For Children?

DEET is a chemical compound of toluene family and hence is an organic solvent. By organic solvent, we mean that it can be absorbed by the skin. Various studies in the US have shown that about 56 percent of the DEET applied to the skin is absorbed, and about 17 percent of it is further absorbed in the blood stream. If applied over the stomach area, it can also be absorbed by the gut. In other words, DEET is not quite safe for use, especially for children. Read on to know the effects of DEET.

The nervous system of children

The adverse effect on the nervous system of children is the most serious concern. This harmful chemical compound is believed to deteriorate the standard functioning of a child’s brain. A test was done on animals by treating them with DEET and it was seen that their neurological behaviour and muscle coordination was severely affected. Many children who were exposed to DEET in significant amount have been reported of memory seizure and neurological disorders.

Frequent and prolonged exposure to DEET formulations over skin can result in inflammation, numbness or burning of lips, skin irritation, rashes and difficulty in concentrating. Studies reveal that children of about 6 to 10 years of age are more prone to catching skin ailments as compared to adults.

Sensitive children if exposed to a substantial amount of DEET formulations are likely to have respiratory diseases such as asthma, chronic bronchitis, etc. Even though it helps in repelling mosquitoes, DEET has many adverse effects on the health and is not safe for use, especially for children. Always Use DEET Free Mosquito Repellent Products.

Safe-O-Kid has a wide range of mosquito repellent products that are safe, natural and environment-friendly. The products are designed especially for kids and are tested by international experts for lasting effectiveness and zero side effects.